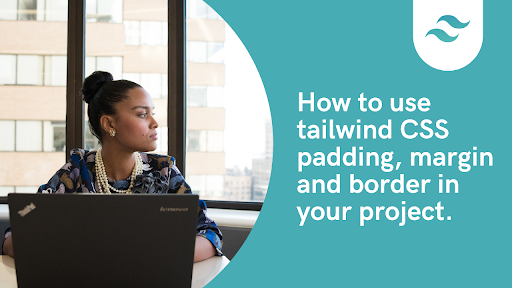 How to use tailwind css padding, margin and border in your project.

As important as CSS margin, padding, and border are, most developers often struggle to understand these concepts.

New developers usually use these properties without realizing or acknowledging their importance when rendering items on our page. Although the Tailwind width does not include the margin, padding, or borders.

In today’s Tailwind CSS tutorial, we will explain what these properties are, when to use them, and how to use them when we build a project.

We cannot explain these properties without explaining the box model.

It may not be obvious, especially to new developers, but every HTML element is rendered as a web page box.

You may create an image that is round and text beside it. When you inspect it, you will see that HTML renders it as a box.

Therefore, a box model is a box that wraps every block-level HTML element on a webpage. This box model is composed of the content, padding, margin, and borders.

The content has to do with the value of the specified HTML element. This could be an h3, an a tag, or even an <img> element.

What is the Padding?

The next area after the content is the padding area. The padding area is the space between its content area and its border. The padding uses whole numbers and even percentages to calculate the width of the element you want to style.set padding on an element.

In Tailwind CSS, the padding size is usually set using the shorthand padding and a class of p. Other classes include pb, pt, py, px etc.

The Tailwind padding controls the top, bottom, right, and left space between the content and the border.

However, the tailwind CSS framework offers more default classes for your web development.

You can find all the default padding in Tailwind CSS documentation.

The next thing we will be wondering is when we can use the padding property. You can use it in the following ways.

Determining the padding percentage you wish to add to your element can be a bit tricky. I will be helping you out. if for example your #demo is 650px wide, 10% padding will be equal to 0.1 × 650 pixels = 65 pixels. You can easily use this by adding a square bracket that contains the CSS value (e.g. [10%]) to the prefix such as p- for padding.

How do you give padding in Tailwind?

Adding Tailwind padding to your Project is not as hard as you may think. All you have to do is to add the classes to the element that you wish to control its space and you are done. You can see an example below.

Tailwind padding on a single side

This utility helps to control the padding on one side of the element. we can see an example of these in the image below.

We are going to build a text element. It will be represented in block form, and we can see the effect of Tailwind padding on these blocks. You can also check out this blog to learn how to set up your tailwind the easy way

The Tailwind CSS margin area is shown by a margin edge that is invisible around the border area. The margin separates elements from other elements.

Manipulating these areas gives the different elements the space their need to appear well on the webpage. If you don’t apply Tailwind margins to your elements there will appear joined together.

In Tailwind CSS, the margin property is usually denoted with the shorthand margin and class ml. Other classes include mb, mr, mt my, mx etc.

You can check other classes and their properties in the Tailwind CSS documentation. The Tailwind margin property can be used in the following ways

How do you give margin in Tailwind?

How do you add a margin in Tailwind?

Giving a Tailwind margin to an element is simple. All you have to do is to assign the value of the CSS (e.g.[3]) with the prefix m- to the element you wish to style. You can see some examples of these on the project below.

The project we created will look like the image below.

The Tailwind border acts as a shield or edge for the box wrapped around every block-level HTML element. You can see the border of any element by adding the property border to your style.

In Tailwind CSS, you add classes to make your border spacing visible on an HTML block-level element. We all know that all HTML elements are block-level even if it doesn’t appear that way. Below are several Tailwind border classes available along with their properties.

The Tailwind border property is usually used when you wish to control the border styles.

What is Tailwind border?

The Tailwind border utility is in charge of controlling the border of an element. When you create an element, it comes with a border and so this utility allows you to control the border radius, border width, and border color of this element.

Tailwind border-radius has to do with controlling the radius of an element using this utility.

How to use the Tailwind border-radius?

The Tailwind border style utility is essential especially if you want to make a jaw-dropping design on your application.

There are many classes available to use here. This utility simply allows you to style your border elements. Some of these classes include border-solid, border-dotted, border-double, border-dashed etc.

You can see some of the applications of these classes on the project below. You can check our blog on setting up your first project using tailwind css

our Tailwind Border project should look like the image below

At the end of today’s Tailwind CSS, we showed you how important Tailwind CSS Margin, padding, and border spacing are to a developer.

We also explained what they are and showed the classes available in Tailwind CSS padding, Tailwind margin, and border spacing tailwind. I hope you can use the Tailwind CSS border-spacing, padding, and margin better now.

How to use the Tailwind CSS JIT CDN

How to use Tailwind CSS in React