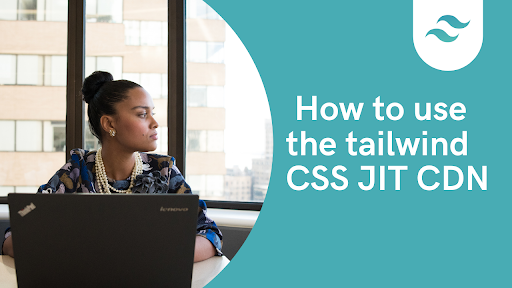 CSS is a utility-first CSS framework. It provides you with CSS classes that you can use to create designs for your web pages quickly and with ease.

The introduction of the Tailwind CSS CDN allows you to create designs, and try out multiple designs for your projects without worrying about installing node and dealing with the node modules.

With the Tailwind CSS JIT CDN, all we need to create beautiful projects is to write some HTML with the tailwind classes, and they will be rendered on the front end of your application.

Alternatively, you can use a simple website builder called Windframe to build a website without a single code or knowledge of writing code.

Tailwind JIT CDN mode is a compiler introduced in tailwind CSS version 2.1, JIT which stands for Just-in-Time is a new compiler that generates templates on demand instead of creating everything in advance during the construction stage.

Why use the Tailwind CSS Just-In-Time (JIT) Mode?

According to the Tailwind CSS documentation, the compilation time with the Tailwind CSS CLI takes about 3-8s, and for Webpack applications up to 30-45s, but with the new JIT compiler, that time is shortened to 800ms, regardless of what tool you are using.

When using the Tailwind CSS CDN, variants like active or disable are not usually enabled at default because of file-size considerations, but with the Tailwind CSS JIT compiler, we get access to whatever variants we like, as the styles are generated on demand.

With the Tailwind CSS JIT CDN mode, you can generate arbitrary styling without writing custom CSS. We do so using square bracket notations like h-[30px]

Before the Tailwind CSS JIT CDN, it was challenging to use arbitrary styling. You would have to either define a new variant, use inline styles, or create a custom CSS class to use this value.

Unlike when using the previous tailwind CSS version where you will need to purge the CSS during production.

With the new Tailwind CSS JIT CDN, you won’t need to purge any CSS because the staging styles are the same as the production styles.

With the Tailwind CSS JIT CDN, the browser does not have to load heavy CSS files initially as the CSS files are generated on demand. This makes your web pages load a lot faster, especially in large projects. It also improves your user experience for your users.

How do you add a JIT in Tailwind CSS?

To use the Tailwind CSS JIT CDN mode in your project, you need to attach it like you would JavaScript using the script tag.

It’s completely open-source, you can check it out on their Github.

One of the downsides of using the tailwind CSS JIT CDN is that the arbitrary values can create an undocumented mess, leaving the risk of inconsistent designs.

However, this is true when you use this feature too often, so it should be used with caution.

Should I use this new addition?

The question of whether you can use this new production is entirely dependent on what you are working on. You can use the tailwind CSS JIT CDN react on your react projects or any other technologies you may want to use them.

Ultimately, the tailwind CSS JIT mode is relatively new, and the tailwind team is still improving on the details of the mode and will take a while before you can use them on production-grade applications.

However, you can use it for your projects.

Tailwind CSS is a utility-first CSS framework that offers a unique approach to CSS stylesheets. Rather than creating traditional CSS classes, Tailwind uses utility classes that are designed to be combined to create complex designs.

One of the benefits of using Tailwind is that it can be used as a Just-In-Time (JIT) CSS framework. This means that you can use Tailwind CSS without having to pre-process or compile your CSS stylesheets. Instead, Tailwind CSS is injected into your HTML pages using a tag.

Once you have included the necessary files, you can start using Tailwind CSS on your HTML pages.

How to create Tailwind CSS Animation

Previous
Introduction to CSS
Next
How to create Tailwind CSS Animation