How to use Tailwind CSS in React

Tailwind CSS makes it possible for us to easily style every element directly on the components without having to create one big class in a separate file and write a bunch of properties to make something. Tailwind CSS is simply a utility-based low–level CSS framework. It’s not the first of its kind but it is certainly the most popular. Tailwind CSS allows us to write great CSS without leaving the file we are currently working on. In our Tailwind CSS tutorial today, we are going to look at how to install Tailwind CSS with react.

At this point you must have downloaded the latest node version. We can now go ahead to create react project.

To do this we need to run a command on our terminal.

The create-react-app command comes with pre-configured files and packages that helps install react and auto-compilation of CSS, JS and ESlint for error alerts.

The command above will start the server and it will automatically open in a browser with the react environment.

This will take a few seconds to install.

The next step is to install create React App Configuration Override also known as CRACO. It’s a create-react-app configuration layer used to override the PostCSS Configuration.

Once the installation is complete, open the project in a text editor (Vs Code) and locate the package.Json in your root directory. In the package.Json go ahead and replace the following files

Save the updates to the package.Json file. After this, you can go ahead and create a new file and call it Craco.config.js in the root directory of your project. <react-twcss> file.

Create another file named tailwind.config.js file at the root of your directory. To do this you should go ahead and run the following command

Add Tailwind CSS The next step is to go to your index.css file and delete the content and replace them with the following code. Code:

Then, you can go ahead and import the CSS from index.css file to the index.js file.

Your browser should look similar to the image below. 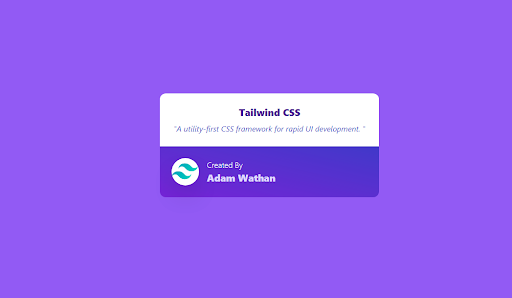 In this tailwind CSS tutorial, we walked you through how to install tailwind CSS in react with a step by step approach. We also created a simple “Hello world” styling it with a tailwind CSS classes to demonstrate that the installation is working perfectly well. I hope you enjoyed this tutorial! you can check our other tailwind

How to use Tailwind CSS in HTML

How to use tailwind css padding, margin and border in your project