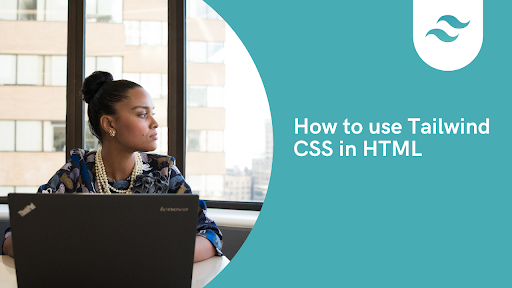 How to use Tailwind CSS in HTML

Tailwind CSS is a utility-first CSS framework. It provides you with CSS classes that you can use to create designs for your web pages quickly and with ease.

This blog will walk you through the different ways you can add the Tailwind CSS in HTML project, what the limitations could be, what developers that have worked extensively with the Tailwind CSS framework recommend and why, and finally how to properly process Tailwind CSS.

There are usually two ways of adding the Tailwind CSS in your HTML project.

Adding the Tailwind CSS in HTML project via the CDN is easier and very beginner friendly. This method allows you to use the Tailwind CSS framework without the need to worry about PostCSS configurations. It is great way to jumpstart your project. However with these perks comes some limitations, some of these limitations are:

To use the Tailwind CSS in HTML project via the CDN, add this at the head section of your HTML project.

With the addition of the link above, you will get access to the Tailwind CSS classes that allows us to use it's predefined styles in our project.

Now, I would suggest if you are building a world application it would be best to install your tailwind CSS using the package manager. This is because most frameworks make use of PostCSS already like the autopicker.

In this part of the tailwind CSS tutorial, we are going to look at how to install Tailwind CSS in HTML using the package manager.

To get the most out of this section of the tutorial, you need the following:

To change file directory run this command in yor terminal.

Next we run this npm or yarn ( if you decided to use the yarn package manager ) command.

With this you would be asked a couple questions, you can skip these questions by pressing the enter key.

Next, we install the Tailwind CSS in HTML project along with the latest PostCSS and autoprefixer using the command below

The chances are that you would want to use your configuration when building your application. The configuration file makes it easy to customize the classes in Tailwind CSS by changing any fonts, colour, spacing, etc.

To override the default classes when using Tailwind, run the following command in your terminal to create a tailwind.config.js file.

In the new config file you can go ahead to configure them by writing the following code on them.

Now, you can go ahead to run the following command on your terminal.

This will generate a new CSS file called output.css. We then include this output.css file in our HTML file, the same way we include a normal CSS file by adding this line of code

With that, you can now use Tailwind CSS in HTML project. you can go ahead to build your application.

In this Tailwind CSS tutorial, we covered how to add Tailwind CSS in HTML file using different methods like through the Tailwind css CDN and Package manager. With this information, You should be able to easily jump start using this framework in a matter of minutes.

How to use Tailwind CSS Flex

How to set up your first Tailwind CSS Project