When building web applications, one of the most important thing a developer must have in mind is user experience. One of the ways a developer can do this is to pay attention to how user interact with his/her applications.

CSS is a self descriibed utility-first CSS framework. It is used for building beautiful user interfaces. It is non-opionated therefore easy to style.

In this article, we are going to build a Tailwind CSS Modal dialog.

What is a modal dialog

A modal is simply a pop up window that appears on top of a main content of a web application. Modal dialog always seeks for user interaction. there can also be used to give critical warning to users to prevent errors. Throughout the Tailwind CSS tutorial we are going to use Tailwind CSS, HTML and JavaScript to build our modal dialog. The Tailwind CSS modal dialog will look like the image below

Add Tailwind CSS to your Project

Before we can go on, it is assumed you have Tailwind CSS installed on your system. If you haven’t, you can check out how to do this on our previous tailwind CSS tutorial. Creating a button The first step after installation of the tailwind CSS is to link the html to the tailwind CSS like the code below.

Once your Tailwind CSS stylesheet is correctly linked. We can go ahead to create a simple button first. To do this, we wrapped our button under a “div” container and added instruction on our page to click on the button. You can see the code below

We can go ahead to create an overlap effect. Overlap effect makes sure the user attends to the dialog box first before continuing with the site.

In the code above, we used some Tailwind CSS style to render an overlap effect on our page.

We initially stated at the beginning of our tutorial how important the modal dialog is and what it does for the user. In our case we created a modal dialog that tells the user whether he /she has successfully created an account.

In the code above, we first started by styling the head of our modal dialog. We did this by adding classes that will enable us align our elements inside the parent “div”. we went ahead to create child “div” which contained an “svg” element. Some classes we added to our modal dialog include

We initially added some IDs to the buttons when we were creating the style for the modal dialog and the instruction button. We are going to go ahead and add functionality to this buttons by first grabbling all our IDs. You can write the code inside the script tag at the bottom of our page.

In the code above, we used the “document.getElementById” to grab the IDs we have given to the buttons on our page. We can now make the buttons do what we want. First we want our “open modal” button to open the modal dialog when clicked and our “OK “ button on the Tailwind CSS modal dialog to close when clicked. To do this we have to create a function for the both button to do this. The functions are written below

Moreover, we need the button to close too when the user clicks anywhere on the window. So we are going to create a function that will do this for us

With the code above, our Tailwind CSS modal dialog is ready. It should look like the image below 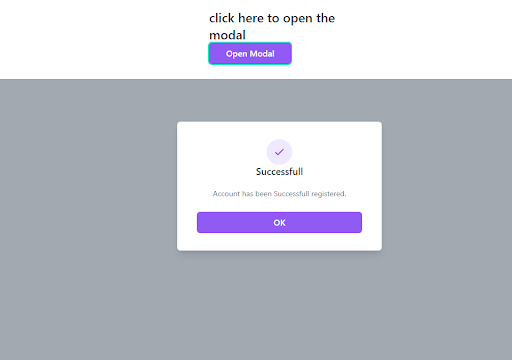 How to install Tailwind CSS in Laravel